While removing snow from sidewalks and driveways, The Northwestern Water and Sewer District ask you to take a few minutes to clean the snow from around the fire hydrant on or near your property. 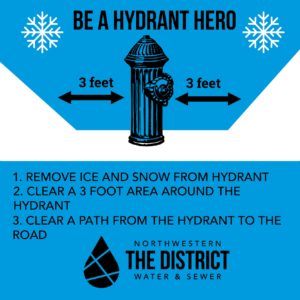 There are over 3,800 District fire hydrants, and while fire department crews do their best to remove snow, it can take several days or longer to clear them all. It’s a safety concern too, having a clear hydrant during an emergency delays response.

The District respectfully asks residents to clear snow from hydrants closest to their homes and be a good neighbors and clear snow from fire hydrants for family, friends, or neighbors who may have medical conditions, disabilities, or even the elderly who may be unable to do so themselves. Such acts of kindness will benefit the entire neighborhood!

Check out our “Hydrant Heroes video.”