In December, The District held a second informational meeting regarding regional water for our customers who are supplied with water from the City of Toledo. There were presentations on the three water source options The District and other entities are exploring: The City of Toledo, The City of Bowling Green, and the Michindoh aquifer.

The District continues discussions with The City of Toledo while awaiting the results of active studies on using Bowling Green and the Michindoh aquifer. At this point, there are many unknowns, but because The District's contract with Toledo expires in 2024, The District hopes to decide on the water source by the end of this summer.

The District is in the process of evaluating the effectiveness of its existing rate structure. In January, the Board awarded a contract to conduct the study to the firm of Raftelis, which has partnered with Greeley & Hansen and Jones & Henry Engineers.

Over the next several months this national firm will evaluate the effectiveness of The District's existing rate structure and propose a plan to promote continued long-term financial health and system sustainability. The review process should take six months, with recommendations presented this fall. Information on how it impacts your rates will be announced in future newsletters.

All members of the District's Board of Trustees will return to serve another year in 2019; however, there will be a few changes in Officers of the Board. In January, the Board re-elected Mark Sheffer as Chairman. Mark will continue participating in regional water discussions. This is his fourth consecutive year as Chairman. Steve Arnold was elected Vice-Chairman, replacing Doug Miller. Arnold served in this role in 2017. Township appointment Melinda Kale was elected Secretary.

District Board of Trustees Meetings is held on the second and fourth Thursday of every month at 7:30 a.m.

Board meetings are open to the public.

Over the past nine years, The District has invested over $215 million into Northwestern Ohio's water and sewer infrastructure. 2019 will be The District's largest construction season in history, with over $32 million in estimated investments into water and wastewater projects across Wood and Hancock counties. Watch for updates on projects in your neighborhood as we frequently provide more information on our website and social media.

Through June, crews will be replacing lead service lines throughout Rossford and western Northwood. 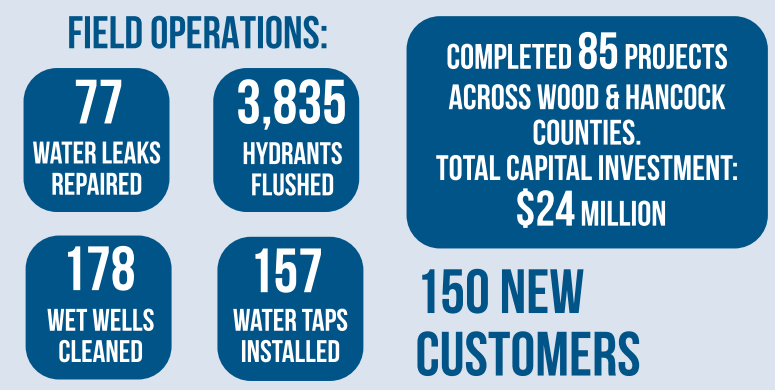 To ensure constant flow, pressure, and Ohio EPA compliance in our Toledo-area water system, The District is working toward a phased construction approach to build a new elevated water storage tank. Elevated tanks help to provide stable pressure and flow throughout a water distribution system. During low flow periods, the tanks fill from high service pumps in the system. During peak flows, the tanks empty to meet the needs of customers.

Once the design is complete, construction of a one-million-gallon elevated tank, to be located near State Route 420 and U.S. Route 20, will begin. This developing area is projected to have significant water needs in the future. The tank will also provide a redundant water supply for the west side of The District's Toledo-supplied water system, which includes Rossford, Northwood, Perrysburg Township, and Walbridge.

Funding has been secured from the Ohio EPA's water supply revolving loan fund with a reduced interest loan. The project is estimated to cost approximately $7 million with construction starting as early as this fall.